We drift up to the start and mill around. 630 on the dot the race starts to wild cheers. I’m deliberately at the back – I don’t want to get in the way of the competitive runners, and I don’t want to start too fast and burn out – I don’t know how much energy I’ll need to cover the distance. This is actually a mistake – I end up behind a blind runner, being guided by a friend, and can’t pass them on the narrow trail. I’m going even slower than I would like – even though everyone is walking up the steps to the top of Kaukau. This stage is very slow and easy. The view at the top of Kaukau is spectacular – it’s still dark, so as well as the lights of the city there are lights strung out along the hills, heading out towards Makara. I’m right near the back, but this is fine. I jog off, music on, taking things very easy.

The Skyline walkway is a relatively easy path – a few hills but nothing serious, and for much of it the trails are well-formed. As I come up towards Park Vale Rd I am forcing myself to slow down on the upwards inclines. The hills themselves I am walking – standard tactics for ultra runners to conserve energy. As planned, Rhonda meets me at the top of Montgomery Ave for a cheer, a photo shoot and a status update. I tell her I’m running half an hour behind schedule – which is true but will have unfortunate effects. We nearly send a runner the wrong way as she sees us talking and begins to leave the track with me, but soon put her right.

“But I am smiling!” Top of Montgomery Ave, about 10km in. 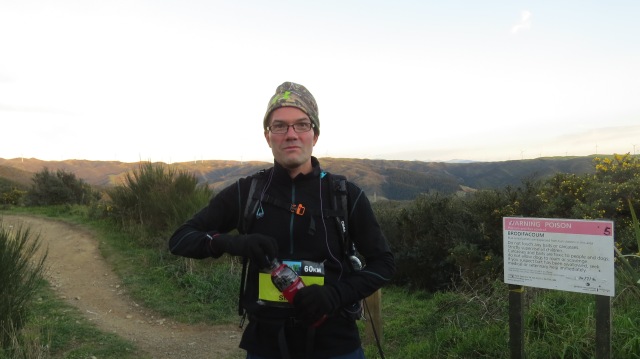 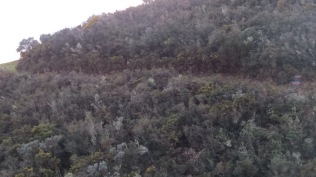 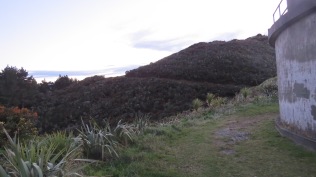 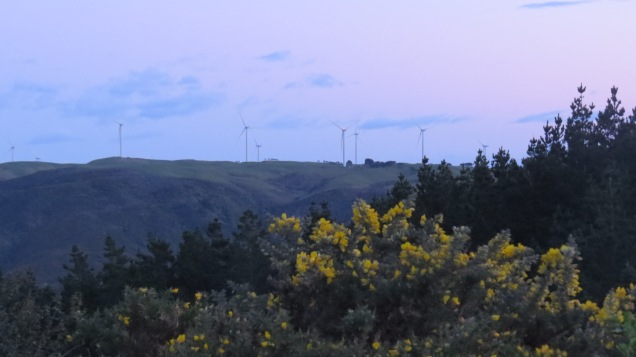 By the time we get to Makara Rd the sun is up, we’ve been going about 90 minutes and I’m feeling good. The aid station is welcome – all sorts of food (quiche-type savouries, brownies, biscuits, burger rings and chippies, fruit, delicious sandwiches, coke, water and electrolyte drinks). This sounds weird, but you burn a lot of calories while running, and need to replace them fast, any way you can. I’ve already eaten a muesli bar and a couple of energy gels. I stop for about 5 minutes and eat a lot. This gives the people I passed in the last mile or so the chance to pass me again. I suddenly realise that everyone around me is running the 42km except me, and resolve to go faster.

The leg starts with a nice steady climb from Makara Rd, up Varleys Track and then the 4WD track to the top. I’m basically walking, though quite fast, except on the absolutely flat bits. I pass a few people here where I can – I seem to be strong on the hills, at least by the standards of someone at the back of the pack. I’m feeling pretty happy at this point, energy levels are good, the sun is up, and I’m not sore at all. I’d gone into the race with a tender calf, that had previously led to knee pain when I pushed out over about 20km. But so far, all was good.

A nice jaunt up  the hill, a few words exchanged with other runners and then the courses split, me heading down the south end of Makara Peak on the 60km route. I passed a couple of women – the first runners I’d seen in my group. This part of the race is possibly my favourite, some beautiful scenes around the back of Makara. There were some technical downhill bits that runners ahead of me passed with poles, and I navigated by grabbing branches as I went down. A bit of chatter here, the runners behind me glad to see me so they could be sure they were going the right way. Again I passed people on the uphill. There was one strange moment here – I passed a runner going up, then began to run as the trail went downhill. He blew past me – OK, I’m slow downhill so that’s fine. But I caught him again later, and passed him – and he did the same thing! Twice more! I can’t see why he was doing this – running slow until passed and then speeding up. It annoyed me, so I sat off him all the way to Wrights Hill, before finally passing him at the fenceline – I never saw him again.

Anyway, that out of the way this section was pleasant and although I didn’t break any records I was feeling good. Nice easy trails, I didn’t stumble. I hit the second aid station to see Rhonda and a bunch of people dressed in cow onesies. There’s more food, Rhonda and I chat and change out my Powerade and water bottles. My feet are fine and the trail shoes seem to be gripping OK, so I don’t bother changing socks or shoes. Rhonda’s surprised at how fast I ran this session – “maybe you’re just bad at running at night”. This means I leave the aid station with the sound of cow laughter in my ears, but that’s OK. It was friendly laughter. And they were amazing, cheering runners into the station, even people they didn’t know.  They had signs (“keep moooving”) too. I hear that the leader was at the top of Wright’s Hill an hour ago – he must be flying.
The cows (photo by 74Running) 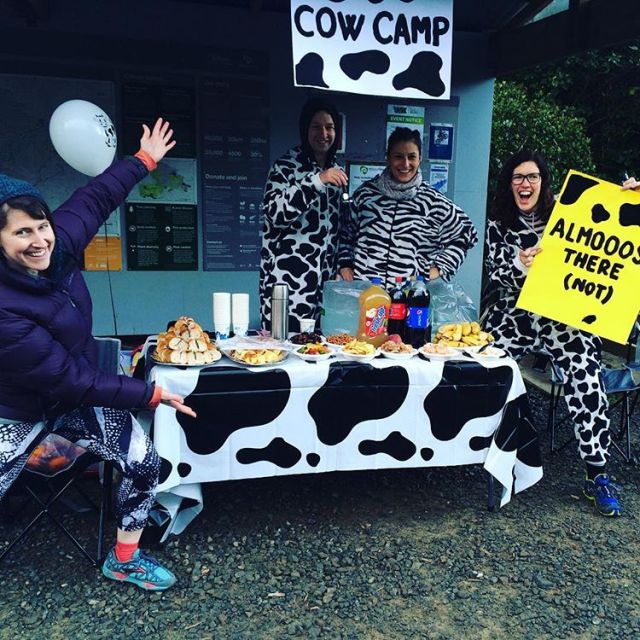 New Zealand librarian and music fan, living in London.
View all posts by simonchamberlain →
This entry was posted in Uncategorized. Bookmark the permalink.